Michael Paal – from a soccer player to an enthusiastic triathlete 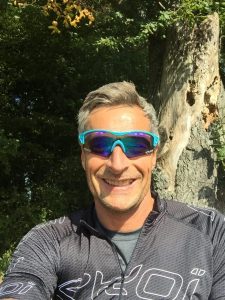 “I hardly knew how to swim at all in the beginning. So at least I didn’t crawl. Now it’s actually my favourite discipline.”

Michael Paal, one or two of you might know him, is a former soccer player. He was a federal devision goalkeeper, played for Sturm Graz, St. Pölten and Donauwitz Steyr before he retired from active football. Afterwards he obtained the highest coaching diploma, was national team coach for ten years, accompanied the team at two European Championships and one World Championship and finally finished completely with soccer.

“As a professional athlete, you are used to train all the time and to keep moving all the time,” says the guy from Styria, who now lives in St. Pölten. “So after I finished my career I was looking for a new sport”. Triathlon fascinated him. The disciplines running and cycling were no problem. Swimming challenged him. “I hardly knew how to swim at all at the beginning. So at least not crawling. In the meantime, it’s actually my favourite discipline”, says Michael with a laugh. He can only tell every beginner, to give it a try, it’s important to keep at it! “It can be quite long, but it pays off absolutely.”

So it happened that Michael Paal was at the starting line at the first middle distance in St. Pölten in 2007 and has only missed one race since then. “Once I was sick, but all the other years I took part”, he says. How does he train? Like it fits into his daily life. He doesn’t have a coach or a training schedule, but he loves exercise – sport is a fixed part of his life.

In 2020, he will also be at the starting line in St. Pölten, this year as testimonial of the race. “I like the whole course, swimming in two lakes with running in between, cycling through the Wachau and finally running in St. Pölten,” he says enthusiastically. He is especially looking forward to running. St. Pölten has become his home and there is no better way to finish the race than in front of a cheering home crowd.

Sign up for our newsletter
Contact
Races
Athletes
Instagram
© ALL RIGHTS RESERVED.
Michaela Rudolf – Triathlon as a philosophy of lifeNews
Exclusive pre-registration for Challenge Roth 2021News