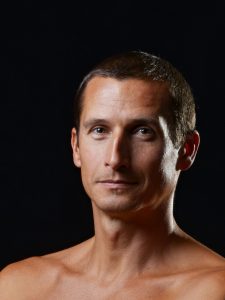 “When I heard that my favourite race changes colours, I said to myself, Filip, you have to be there.”

Three times he stood at the top of the podium in St. Pölten (2010-2012), but he was also allowed to cheer at numerous other triathlon competitions. The talk is of Filip Ospalý. The Czech won his very first middle distance race in St. Pölten in 2010 and has had a strong connection to the race ever since then.

Filip comes from the Czech Republic. In his hometown, a small village near Brno, he had everything he needed for his race preparations, he tells us. He lives there with his family and the training conditions have been very much appreciated by him in over 20 years of professional triathlon. At the beginning of his career, the then 16-year-old started on the short distance. He took part at Olympics three times and several times in European and World Championships. “In 2010 I was doing my first middle distance in St. Pölten”, the now 43-year-old tells with a smile. “I didn’t know what to expect and on this day I could go home as the winner. Since then I have been associating a lot with this race”. In the following years 2011 and 2012, he did it again and won the race in the capital of Lower Austria. “But it is not only the memory of the victories that makes St. Pölten so special for me. Everyone there always gives 110%. From organisers, volunteers and spectators to accommodation and all the carrying about the athlets – everything is on high level and I can only recommend the race to everyone”, says Ospalý.

As number eight he makes our testimonial team complete. Since the end of his professional career, he has been competing in relays from time to time. “When I heard that my favourite race changes colours, I said to myself, Filip, you have to be there”, he says laughing. Even more he was happy to be part of the Testimonial Team. Together with Challenge Family President of the Board Zibi Szlufcik and Nina Schwarz he will start as a relay team. “I will be doing the running part because it is my favourite discipline, and I am looking forward to seeing each of you on the track or at the edge of the track.”

Sign up for our newsletter
Contact
Races
Athletes
Instagram
© ALL RIGHTS RESERVED.
Exclusive pre-registration for Challenge Roth 2021News
Battle of the giants at the Triathlon Challenge St. Pölten 2020News